In my previous post (which I realized was my hundredth!), I mentioned that I would share some thoughts regarding the sermon shared on the morning of Reformation Day in the Schloßkirche, the church where Luther nailed his 95 Theses. This post is that promised reflection.

The reverend preaching the morning of Reformation Day shared an interesting and concise sermon about Luther (I mean, it is the 500th anniversary, after all). His opening remarks about the relations between the Lutheran and the Catholic Churches caught my attention immediately. According to the reverend, the two are together coming to an understanding of justification by faith and not by works, in an attempt at ecumenism that will bring unity rather than the division that Luther never intended to cause. If that is true, wonderful; if not, I wonder what Luther would have to say about the conversations that have been held between the two bodies.

Another interesting aspect of the sermon for me was the idea of “releasing Luther” from the layers of tradition and misunderstanding that have developed over the centuries and to return to the roots of who this man was. Luther was then presented as a driving force in the socio-economic changes of his time and a clarion call of spreading love to those around us, to lift up the desolate as Luther did. This is the face of Luther that we need to see and share today.

With all due respect to the reverend, I do have a few challenging comments in regards to the last couple of points.

I do not doubt that over time Luther has been misunderstood and his platform for change misconstrued to serve the purposes of others who desired to use his name and cultural ties for their own gain and propaganda (for example, the 400th anniversary of the nailing of the Theses took place in the middle of World War 1 where the Germans used Luther as uniting factor to push their military agenda).

I also absolutely agree that reading authors of old for themselves and within their own context is extremely important. Too often we base our opinions on what other people have studied and not what we have studied for ourselves. Of course, not everyone has the ability to read medieval German, handwritten manuscripts, but reading a translation of Luther’s works rather than relying on the summarizing and quotation of scholars is already a great step in the right direction.

And social action is absolutely important, but from the Christian point of view it is not the whole story. To say that Luther was a social activist is fine (although he is famous for his anti-Semitic views, another reason why the German military chose to herald him during war efforts), but the reason he chose to live a life of service and education to his Christian brethren in the way he did was a result of a theological understanding. To present Luther as a social reformer alone, while much “safer” in today’s general post-modern society, does not fully depict the magnitude of Luther’s discovery. Social gospel, without the declaration of the gospel of salvation, is incomplete and cannot stand.

On a day as special as Reformation Day, wouldn’t it make more sense, instead of speaking entirely about Luther, to speak about what he had discovered from reading the Bible? Should not the focus be on the special message of Scripture that he “uncovered” that then led a revolution not only in how people understood their relationship with God, but also their relationship with each other?

I once read a fantastic scholarly paper on the study of theology. In it, the author claims that at it’s core, theology is the study of relationship. This is what the Reformers, like Luther, were seeking to understand in their study of Scripture.

The author continues by stating that if we were to simply continue promoting the work of the Reformers such as Luther, Calvin, Zwingli, and others, that we would actually be doing them a great disservice. If we want to truly honor the work of the Reformers, we would continue what they had begun; indeed, press forward with what those who had lived long before the official Reformation had started.

A continuous, personal search of Scripture and the seeking of its application to the life is the only way to truly celebrate the discoveries and honor the sacrifices of those who felt the high importance of knowing God and living for Him above all else.

While we can celebrate the works of great men and women who have had profound impacts on our planet and worldviews, often without the slightest intention of doing so, let us be careful not to venerate them as more than humans that allowed themselves to be greatly used by God.

Martin Luther wasn’t perfect—far from it. Neither are any of we. But we are all on a spiritual journey that, by the grace of God, will lead us to a deeper and greater understanding of who He is, how much He loves us, and how we can share that love to those around us.

Luther actually summarizes this thought well in the following couple of quotes:

“This life therefore is not righteousness but growth in righteousness, not health but healing, not being but becoming, not rest but exercise. We are not yet what we shall be but we are growing towards it, the process is not yet finished but it is going on, this is not the end but it is the road. All does not yet gleam in glory, but all is being purified.”

“A Christian is never in a state of completion but always in a process of becoming.”

As we have now entered into the 500th year since the Reformation is recognized has having officially started, let us all take the time to ask of ourselves, “How can the Reformation continue in us?”

When we do, and then ask God to do His good work in our lives, true change will take place in our lives and perhaps even in our communities.

Who knows? There may even be another Luther among us; perhaps it could be you.

Regardless of our wider role in the history of the world, we can all be assured of this: God loves you and wants a relationship with you. He has done everything that is needed to show you how much He loves you and wants you. He desires to save you by grace, through faith in His Son, Jesus Christ—all you have to do is accept Christ’s sacrifice on your behalf.

May we, like Luther, choose to stand firm in the Word of God and the love of Jesus Christ, our Lord and Savior.

And may the coming days be filled with a true revival and reformation that will bring each of us into an ever closer relationship with our God.

To God be the glory. Amen.

First, I would like to say that my mother and I are safe. The wind storms that have been blowing through Northern Europe and Berlin has announced a state of emergency. Here in Wittenberg, we had rain and strong winds, but nothing too extreme.

I have wanted to visit this historic site for years, and the fact that I was able to come at such a high time is amazing.

Our AirBnb hosts, Michael and Gudrun, have been wonderful to us. Not only did they pick up up last night, but Gudrun dropped us off early this morning in the middle of town to explore.

And I’m so glad! It allowed us to visit Schloßkirche (Castle Church) before the crowds began to arrive. Let me tell you, standing before the Theses Doors, where Martin Luther posted the 95 Theses on October 31, 1517, has me a little “star-struck.”

The original doors are no longer there, unfortunately, but the new ones fully depict the Theses and caused me to pause and imagine the moment that a rebellious, truth-seeking monk acted out a thought that would change the world forever.

There’s a lot more I could share, but I think I’ll save that for the end of the trip. 😉

After visiting the visitor’s center, we discovered that the church was holding a service, so we decided to join. The inside of Schloßkirche is very beautiful, and it seems to have had a lot of work done on it since Luther’s time.

Both Martin Luther and Philipp Melanchthon are buried there, and an original printed copy of the Theses and a few other documents are on display under the magnificently carved pulpit. 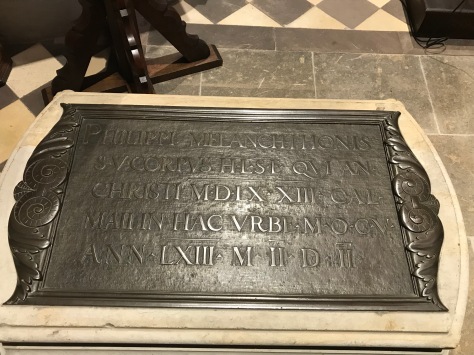 Mommy and I would have had a chance to go through the Theses Doors if we (meaning I) hadn’t spent so much time looking at things. But we ended up discovering a visitor’s center/museum attached to the church filled with amazing images and information.

You know, as a child I never enjoyed history. Now, I can’t seem to get enough of it. Somewhere along the way, I made the connection of how the past affected my present, and it’s relevance suddenly helped me not only find it interesting but enjoyable to study.

So going through this center was like being in a candy shop for me. Not only was there a lot of information about Luther, but other lesser known Reformers that had just as significant of a role in spreading the new found truths of Scripture to the world. Not everyone got the limelight, but that does not in any way diminish their work or accomplishments.

Many of these, such as Jonas Justus, Johannesburg Bugenhagen, Lucas Cranach, Johannesburg von Staupitz, and others were remarkable educators, supporters, and believers of Martin Luther and the mission God had endowed him.

It’s important to remember that the Reformation was not a one man show, but a movement that began long before Luther and is continuing long after. Being here in Wittenberg, where Luther worked and lived, has helped me understand this more than ever before. 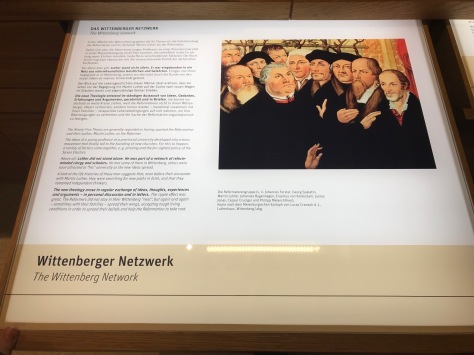 The afternoon was spent walking around the city, enjoying the other historic attractions and watching people prepare the medieval market place that tomorrow will be filled much celebration. I’m going on Tuesday, so no worries–there will be pictures.

We also visited Lutherhaus, on the opposite side of Wittenberg from Schloßkirche. A museum made of and built around Luther’s home, it was filled with artifacts of his life, told his story, and shared his legacy.

When I saw one of the letters written in Luther’s own hand, I will admit I teared up. Not necessarily because the document of great historical or theological significance, but the fact that it was something Luther had touched… It made me wonder about the person he was, the thoughts he had, the emotions he felt, the trials he went through…

It was not unlike the feel I had standing before the Ishtar Gates when I was in Berlin two years ago.

I felt I was before some sort of timecapsule, and it was incredibly humbling.

Have you ever had a moment like that?
So, we had a day full of Luther today and will likely have it so again tomorrow.

Barring any train cancellations, we hope to be in Eisenach to gain some more insight and for some new adventures.